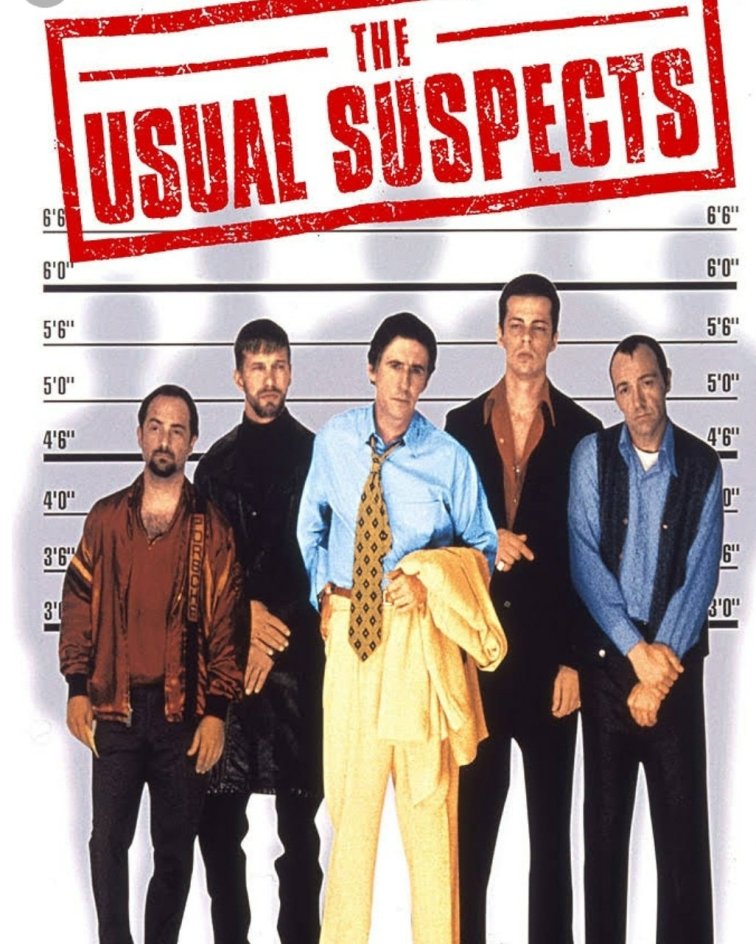 The Usual Suspects is a Crime Thriller that stars Stephen Baldwin, Kevin Spacey, Gabriel Byrne, Benicio Del Toro, and Kevin Pollak as a group of men that have been brought together in a line up after a truck with illegal weapons is stolen and the police suspect one of these men as the primary suspect. Eventually it is found out that whomever stole the truck, stole it from Keyser Soze, a criminal legend who is feared worse than the devil. Once all the men meet Kobayashi, a man that works directly for Soze, they realize that they have all stolen from Soze at some point in time and in order to repay their debt they have to perform one final job and all will be forgiven with Soze. The job does not goes as planned and everyone is killed except Verbal Kint (Kevin Spacey), who is brought in for questioning about what really happened during that final job; and that is where the movie actually begins. The Usual Suspects won 2 Academy Awards (Best Writing, Screenplay and Best Supporting Actor (Kevin Spacey). But did the Academy make a good choice with these awards or did they owe Keyser Soze a favor and had to give this film the Oscar?

The Usual Suspects beat out Braveheart and Toy Story at the Oscars for best original screen play and as far as I’m concerned that speaks volumes for how awesome this screenplay truly is. I was only 13 years old when I first saw this film and I instantly fell in love, especially when the surprise ending was revealed. And the ending of this film is the best part of this movie because this means that Hollywood CAN NEVER REMAKE THIS FILM…EVER!!! And there are actually two surprise endings in this film which is just genius! This film was groundbreaking in hitting us with the ending we never saw coming and so many films have tried to hit us with that shocking ending but it is never as good or shocking as the ending of The Usual Suspects….just iconic.

Kevin Spacey winning Best Supporting Actor was right on. Even today I feel so bad for Verbal Kint, even though he is just as much as a criminal as all the other men in his group. But it is in how Spacey makes Verbal seem so vulnerable and fragile that you cannot help but want to just protect him. If you have not seen this movie, it has to be told that Verbal Kint walks with a limp and has a disfigured hand. This is the role that catapulted Spacey to Hollywood stardom and today he has been black balled but we will always have this amazing award winning performance to watch as a reminder of his great work.

Benicio Del Toro is in the film for a very short period of time and I would have loved to see a few more scenes with him in it. Del Toro is a very intense actor and I enjoy a lot of his work, so fortunately for us film lovers Del Toro went on to have a successful career in Hollywood but we did not get a chance to see what he could really do in this film.

At first viewing you may get a bit confused by whats happening because there are so many details introduced and extra characters that you start to ask yourself, “why is this relevant?”. However, once you watch the movie in it’s entirety you understand why the film was so chaotic at points and why there were so many seemingly random characters introduced throughout the film and this only adds to the genius of the film. But you have to be able to sit through that confusion to get the big payoff at the end and I am afraid that the average movie goer will get overwhelmed and will turn the film off before the ending.

The Usual Suspects is in my Top 5 Greatest Movies of All Time list so it goes without saying that I highly recommend this movie! I’ll be honest, if it were not for this amazing movie I would not be writing movie reviews today. So this Sista Gurl is telling you…GO WATCH THIS CINEMATIC MASTERPIECE…you will not be disappointed. And do not google the ending if you have not watched this film yet! You would be doing yourself a huge disservice.

This is a text widget. The Text Widget allows you to add text or HTML to your sidebar. You can use a text widget to display text, links, images, HTML, or a combination of these. Edit them in the Widget section of the Customizer.
%d bloggers like this: