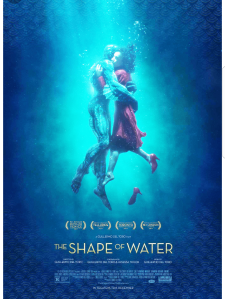 The Shape of Water of an Academy Award Nominated romantic drama that stars Sally Hawkins (Elisa), Octavia Spencer (Zelda), Michael Shannon (Richard), and Doug Jones (Amphibian Creature) and is directed by none other than Guillermo del Toro. In this obscure film, Elisa and Zelda are members of the janitorial crew in a government lab facility and everything seems to be going like any other day until a new project is rolled into the lab that sparks Elisa’s interest in ways she never imagined. I am going to state right away that THIS MOVIE IS NOT FOR EVERYONE!!! The average movie goer will either be turned off by this film right out the gate or won’t even watch it from the premise of the film in general. But the question is, are they right to stay away or is this film a diamond in the rough that shouldn’t be missed?

Sally Hawkins does an amazing job as the mute Elisa Esposito. Yes, I said mute! Sally acts in 90% of this film without uttering one word (there is one fantasy scene where she speaks) and it is amazing. Elisa is not the most beautiful woman or the smartest but she has conviction and compassion which is something that is seamlessly brought to life through the use of sign language and the chemistry she has with her Amphibian love interest (I never thought I would write a sentence that included the phrase “amphibian love interest”).

Michael Shannon is one of this generations best villain actors and I bet you don’t even know who he is! His portrayal of Nelson Van Alden in Boardwalk Empire was bone chilling and I can’t help but see a sadistic maniac every time I see him in a film. This description was so accurate in The Shape of Water and with Guillermo del Toro directing, this man came off as down right sinister. Colonel Richard Strickland is a complete asshole and you know that he will kill his own mother if it meant maintaining complete control and completing his mission. He (Richard) has such a disgusting obsession with Elisa for the most misogynistic reason that you are in constant fear that he’ll somehow get her in a vulnerable position and will harm her in some way. Michael Shannon is a phenomenal actor (and it makes even more sense that he and I share the same birth date!) and I don’t know where he gets his motivations for his roles but he may need to seek some mental help because brotha goes to some dark places.

Again, while this movie will not be for everybody; I can say the plot is very unique and interesting. You have a mute female janitor that falls in love with a mystical amphibian creature and Octavia Spencer is there (I’ll get to her in just a minute). There are unexpected moments of nudity and sex that at first seem random but then they really do add value to the story. You get a little bit of everything with the movie and it tells a story so far different than anything that I’ve ever seen before.

I will not sugarcoat anything here, so I will say I hate the typecasting that happens with Octavia Spencer. I don’t know if it’s because she’s an older woman or curvier but I have seen her play the sassy, big, black woman too many times (yes, I went there). She is capable of so much more and to see the same old thing from her was disappointing. She has been nominated for an Academy Award for this film and I didn’t see why. Again, I like her as an actress but nothing about this performance stood out to me as award worthy.

This movie is kind of slow at times (aka boring) and it is in those moments where some important exposition happens and falling asleep during these scenes is not advisable but I’m not sure about how avoidable it is. It is also hard to get past what I would call beastuality. I mean, yea, the guy is a amphibian/humanoid creature but at the end of the day it’s a big fish.While there were some interesting themes in this movie and I would have to do some spoilers to really dig into those (you know we don’t do spoilers around here!), the screenplay is so over the top that many will probably cut the movie off before they finish it.

The Shape of Water was very interesting and while at times a bit slow paced, it kept me engaged. The average movie-goer will have a hard time getting into this film because of the sheer uniqueness of the plot and that is a shame because they will be missing out on something refreshing. I have complained for years that Hollywood has lacked creativity and would rather make the same type of film over and over again, so I applaud del Toro for writing this screenplay and directing something so out the box. So, this Sista Gurl recommends you take a good nap and get something lite to eat and go watch The Shape of Water.