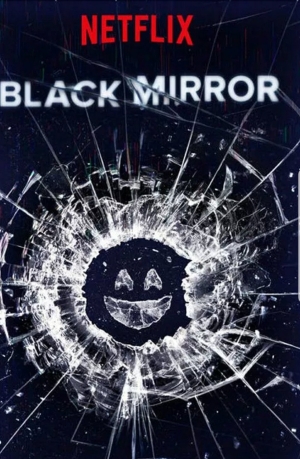 Black Mirror is a Sci-Fi anthology series that feels like a hybrid of X-files and The Twilight Zone. Season 4 hits us right over head with a homage to Star Trek with a twist that for me is a real life nightmare. From there we are given episodes about romance, killer machines, experimentation gone wrong, and even a tale of people doing whatever it takes to keep their sins a secret. It is a quick 6 episodes and while that does not seem like a lot, that can seem like one episode too many if the series is a dud. So, was Season 4 of Black Mirror worthy of 6 episodes or did it leaving us begging for more?

My initial introduction to the Black Mirror Series was very similar to what I’ve heard from others and it boils down to a simple…AW HELL NAW! Luckily I stuck around passed Episode 1 of Season 1 and I am so glad I did. Black Mirror takes you on a serious trip and every time you think you know how the episode is going to progress something comes out of left field and you are left there with your jaw scraping the floor. For me Season 4 is by far the best season yet. There was not one episode where I got bored or where it felt like the director was trying so hard to be thought-provoking that I was left wondering, “what the hell did I just watch?”.  This season felt well thought out  and the writers knew where to draw the line.

Another thing I really enjoyed about this season was how some of the events from previous seasons were reintroduced to us. Although it is an anthology and episodes appear to exist in their own “universe”, it was nice to get a reminder that it is still a single series and it is possible that each episode is actually part of the one single universe where anything can happen. This season just felt much more “mature” than previous seasons and I was definitely yearning for just one more episode.

Black Mirror is a straight up Sci-Fi series, there are no if, ands, or buts about that. And this fact alone may turn some viewers off. It can be unsettling to be introduced to a futuristic world that also has an uncanny way of making you reflect on behaviors and trends that are happening in today’s society.  In short, this series ain’t for everybody.

Another negative about this season is that some of the episodes did take a while to get going and it was exhausting trying to figure out what the twist was going to be. There were even a couple of episodes that I was all in with from the minute it started but then the ending just lost me. Those episodes seemed to be reaching a bit too much to present a message that I, quite frankly, didn’t get.

So look, this is a very Sci-Fi heavy series and if you don’t like that genre then you are not going to like this series. However, for those that enjoy a good mind fuck, Black Mirror is for you! There is some good action, interesting stories, and best of all… the villain always gets just what they deserve. I was excited to see season 4 and it was worthy of a binge-watch session for sure! So this Sista Gurl suggests you get your favorite adult beverage and grab a couple of friends and prepare to have your mind blown by the twist of turns of Black Mirror Season 4.